The planning for Lake Manitou began in 1947.  Murl Duffey began working on finding lost deeds and talking to possible investors many years before construction of the lake project actually began.  Murl suffered many disappointments along the way.  See below for the full story.

Lake Manitou was just a marshy valley of thick underbrush and high swale grass in 1959 when Murl Duffy finally persuaded Jack Smith to buy the land with the dream of turning the valley into a lake.  By the spring of 1960, eighty acres of land was under water.

Photo from the 1959 Argus Press News: (Click on photo to enlarge.) 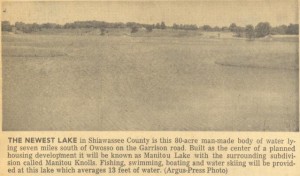